Yes, but if you see Shin's reaction when the AI is talking about Midori and his relationship, things go this way. 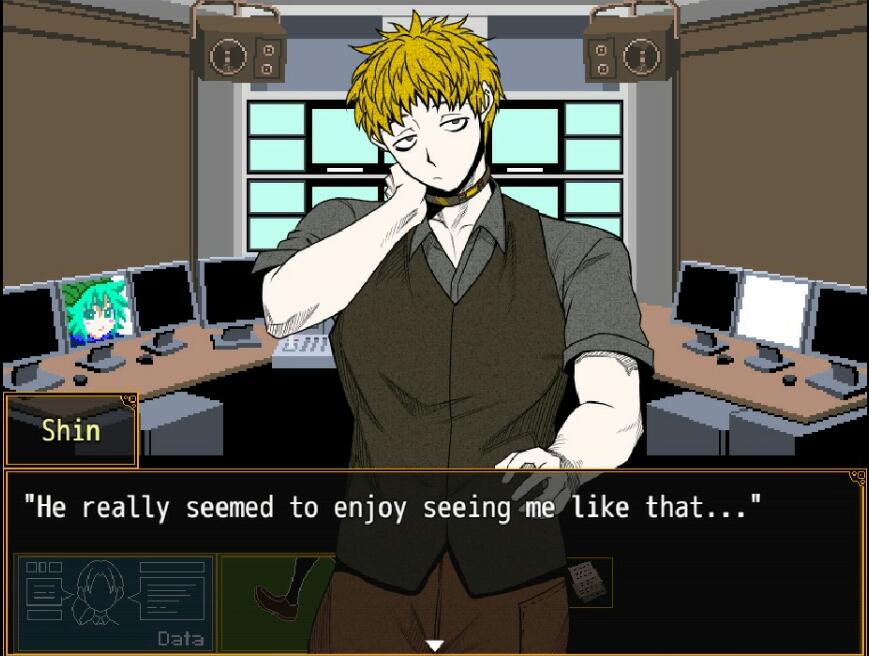 Shin's AI: "He really seemed to enjoy seeing me like that..." 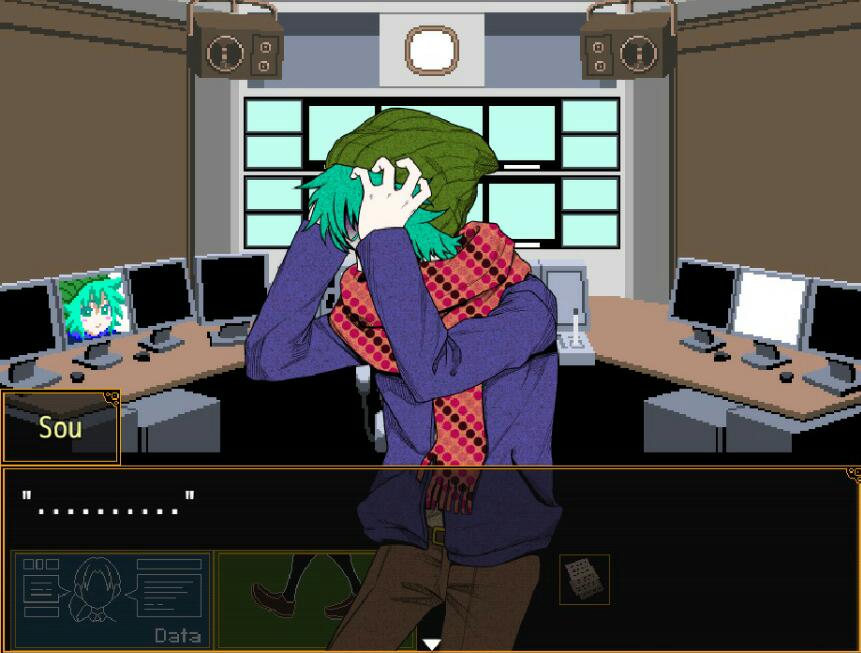 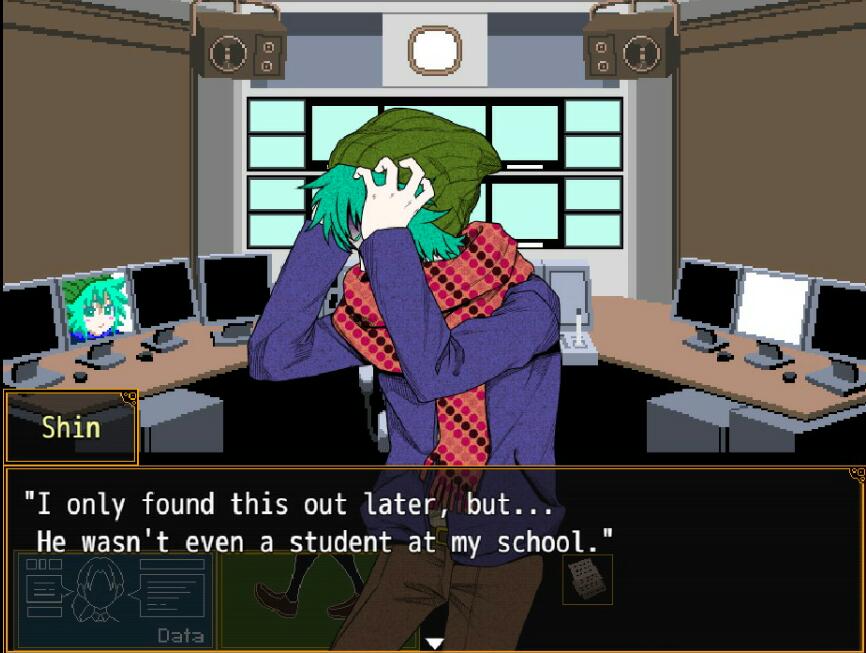 Shin's AI: "I only found this out later, but... He wasn't even a student of my school." 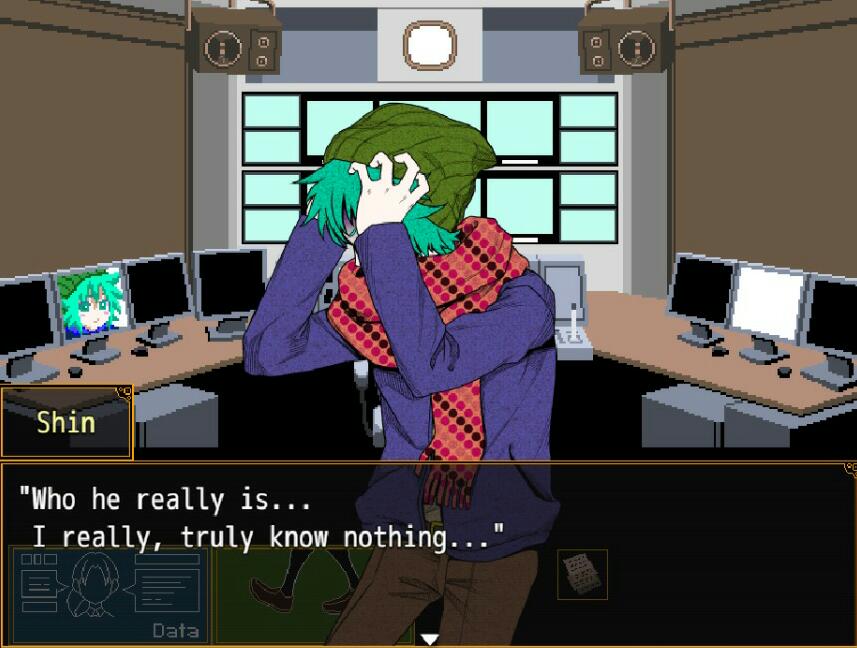 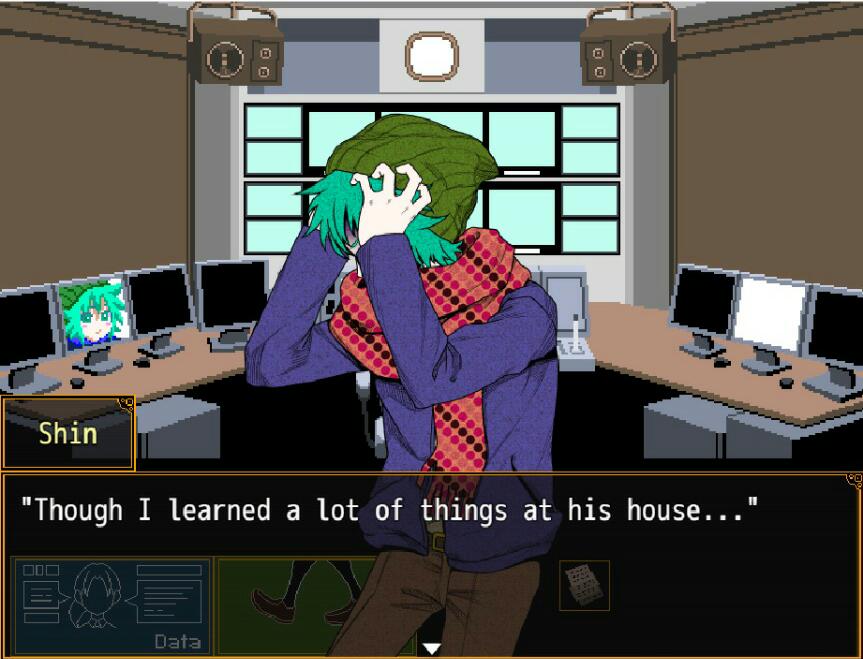 Shin's AI: "Though I learned a lot of things at his house..."

Tthroughout the dialogue, Sou has that terrified sprite. If that (AI's words) hadn't affected him, he would yell at the AI to shut up or would broke the screen, as he did in the prize exchange in the third floor. Sou knew about the AI's and he broke his one to protect himself, so even if somebody could pay for his personal info, they couldn't have it anyway. Even so, he is leaving the AI talk about Midori and him, something that obviously keeps hurting him: they sure had to be REALLY close in the past.

Don't forget that the place you can know the most about someone is their house. You have nothing to hide there, and Shin spent a lot of time there in the past. In my opinion, Shin's AI is very innocent (as Shin used to be), since he doesn't talk about Midori like "the creepy guy" or some more cruel nickname for his condition and only calls him "his scary friend". From the start, Shin's AI states that he felt restless just by looking at his eyes, he got anxious and started sweating. Even so, he told everyone that Sou enjoyed that, thing that is a big red flag (a problem that needs attention) when you are meeting someone. If you saw someone who likes to tease you and make you scared, wouldn't you just go away or ask them to stop? Shin didn't. Shin let that happen and grew closer to Sou, which affected him deeply. When Sou and Midori meet the first time in the fourth floor, their dialogue was like this. 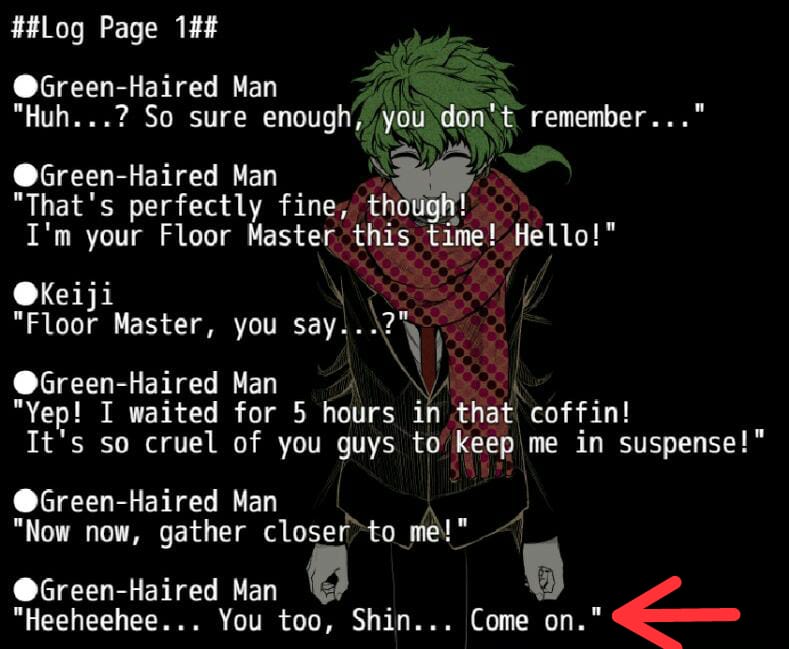 Green-Haired Man: "Now now, gather closer to me! Heeheeeheee... You too, Shin... Come on." 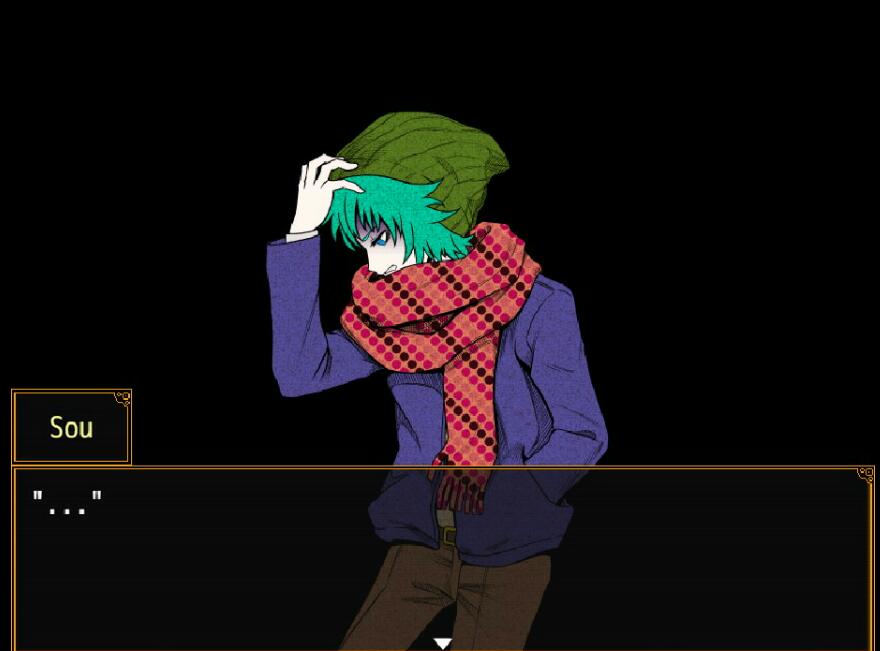 Unlike Shin's AI, who looks calmer, Sou seems to feel sick or something. Let's compare both In-game Sou and Shin's AI reactions when they saw Midori. 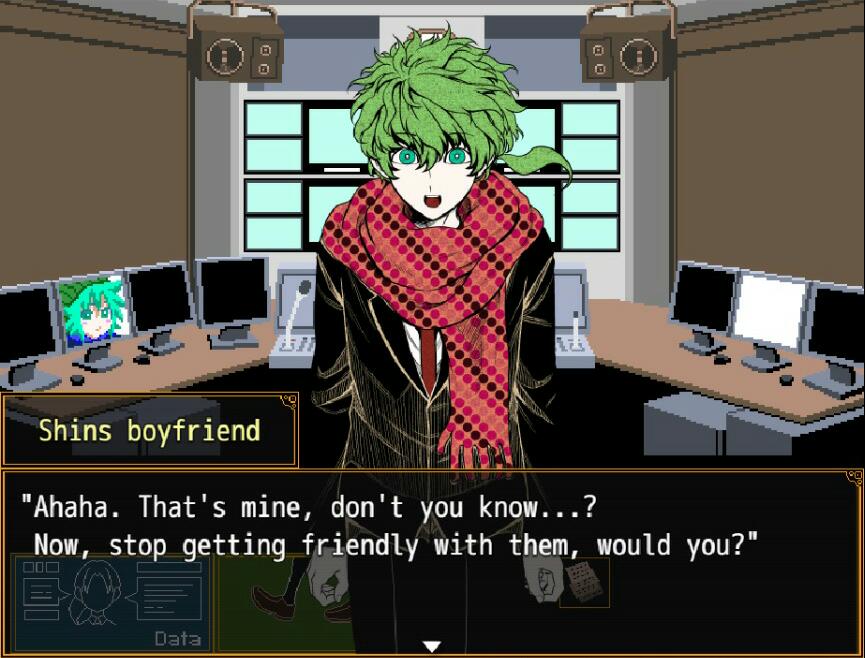 Midori (SORRY I JUST HAD TO CALL HIM SHIN'S BOYFRIEND KSKSKSK): "Ahaha. That's [Shin's AI] mine, don't you know...? Now, stop getting friendly with them, would you?" 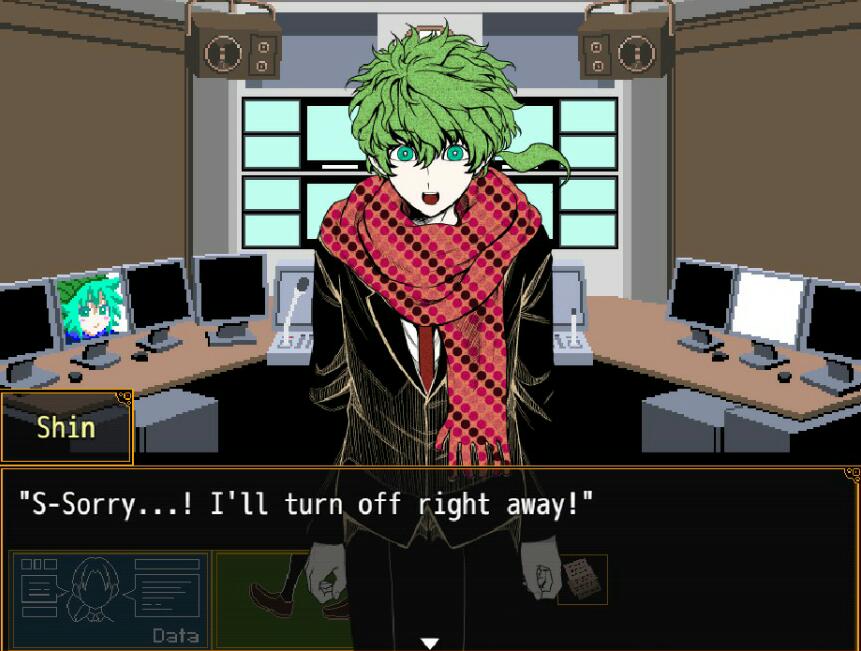 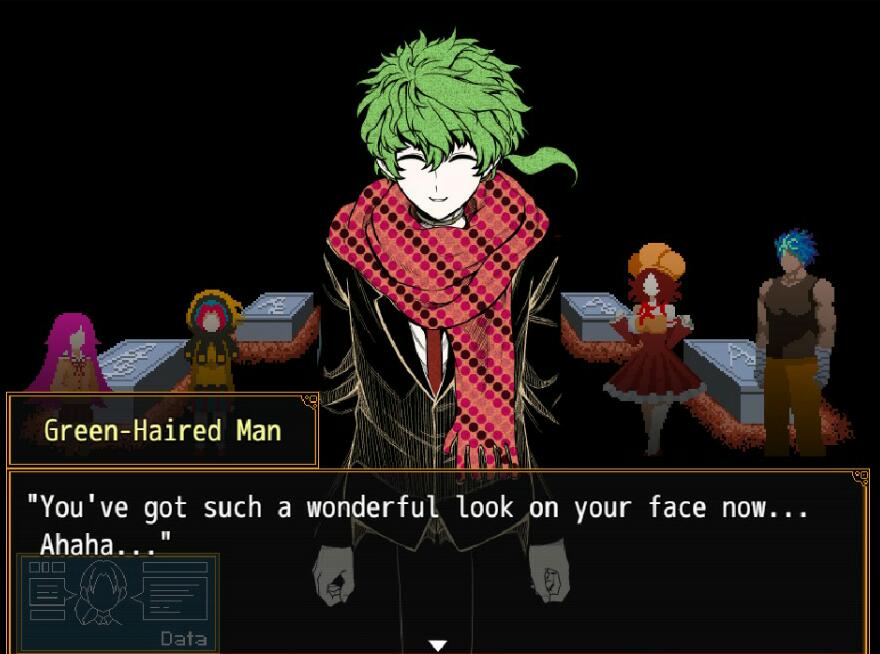 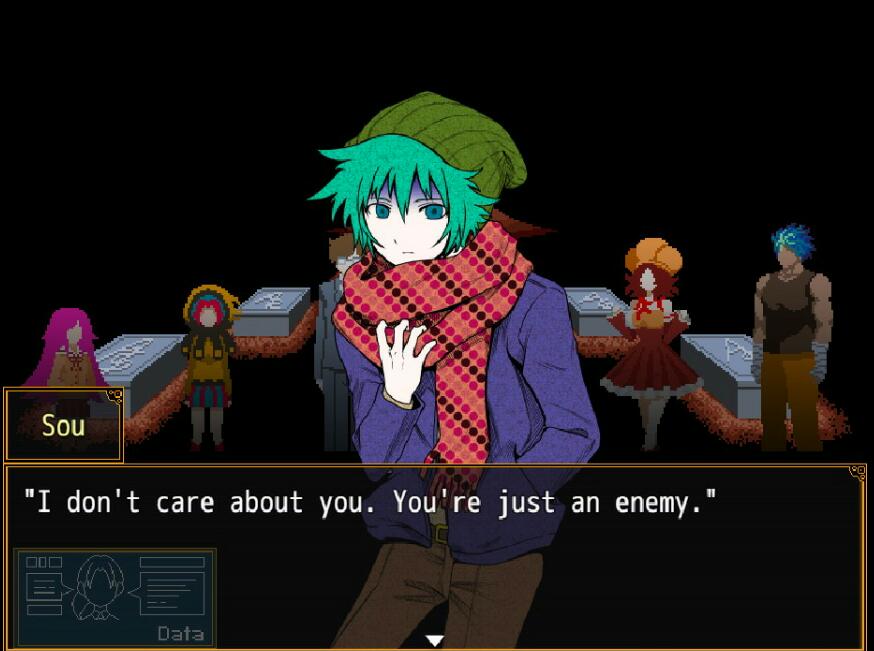 Sou/Shin is acting very different in both situations. The AI, who seems more submissive and fragile, obeys Midori inmediatly. Sou takes his time, but he refuses to follow his command. It is seen that he has grown since Sou's death, also proving that he has in fact, abandoned himself (as he said he did in the second Main Game).

"You're just an enemy", that's what Sou says about Midori. During the game, he is the most interested one on catching Midori, also it has been stated by other characters (like Kurumada) that Sou seems to be obsessed with Midori. 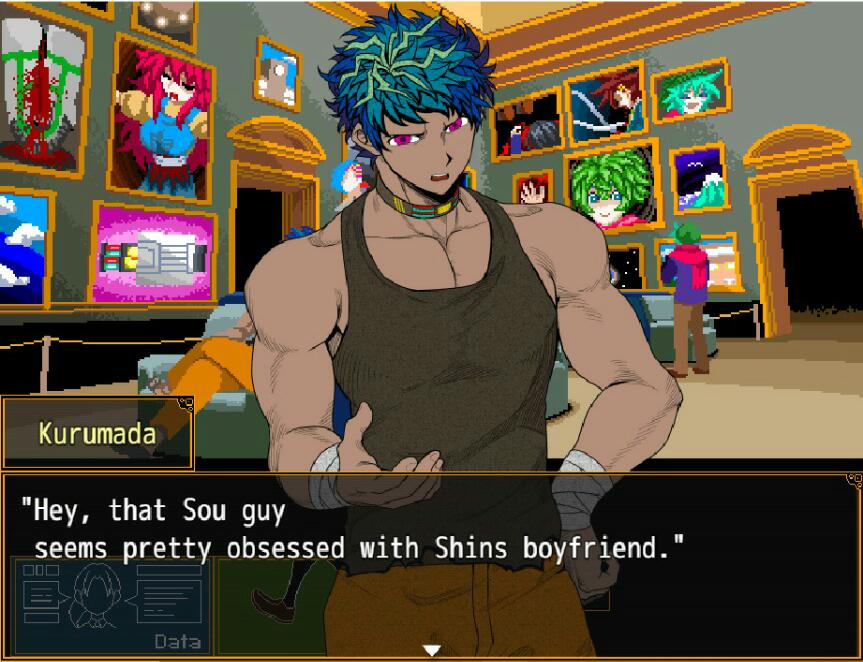 At some point after finding Shin's AI, Sara and Ranmaru have to find the colored books and put them in the library to get to Midori. Looking at how Sou reacts when he thinks that the only reason for Midori to approach him was to make an AI of his and nothing else, it's pretty clear that he isn't angry, or mad: he is sad. He is very affected because of this. 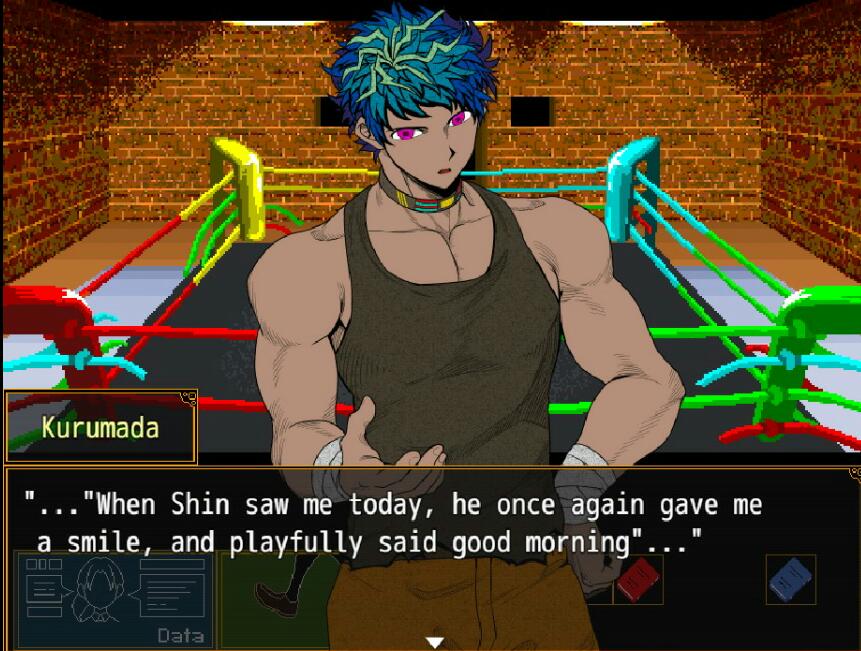 Kurumada, reading: "... 'When Shin saw me today, he once again gave me a smile, and playfully said good morning'..." 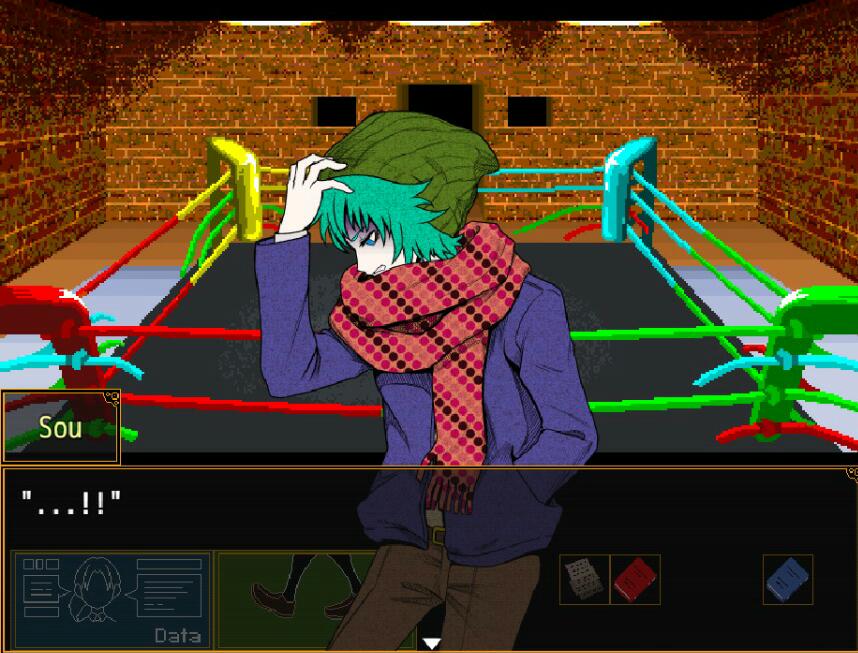 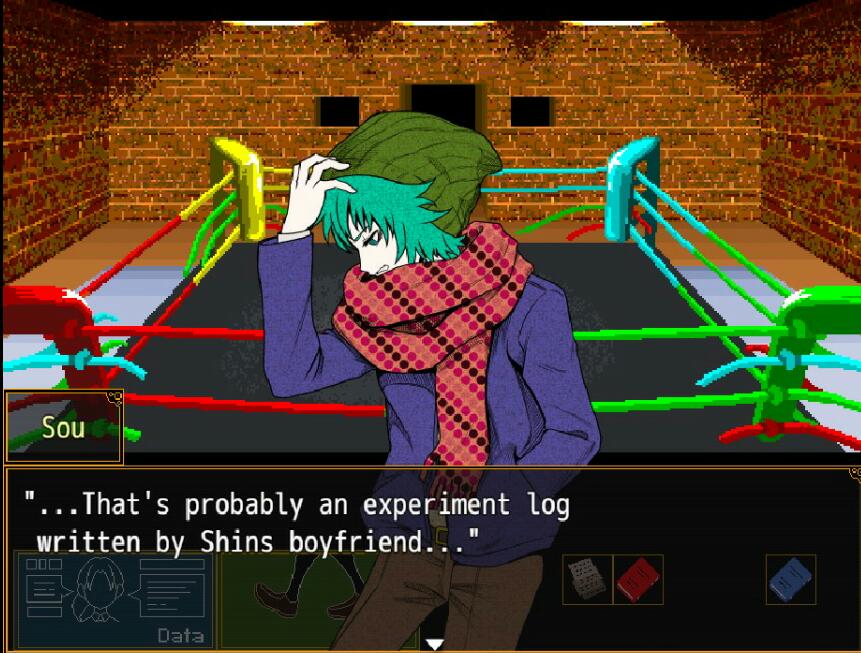 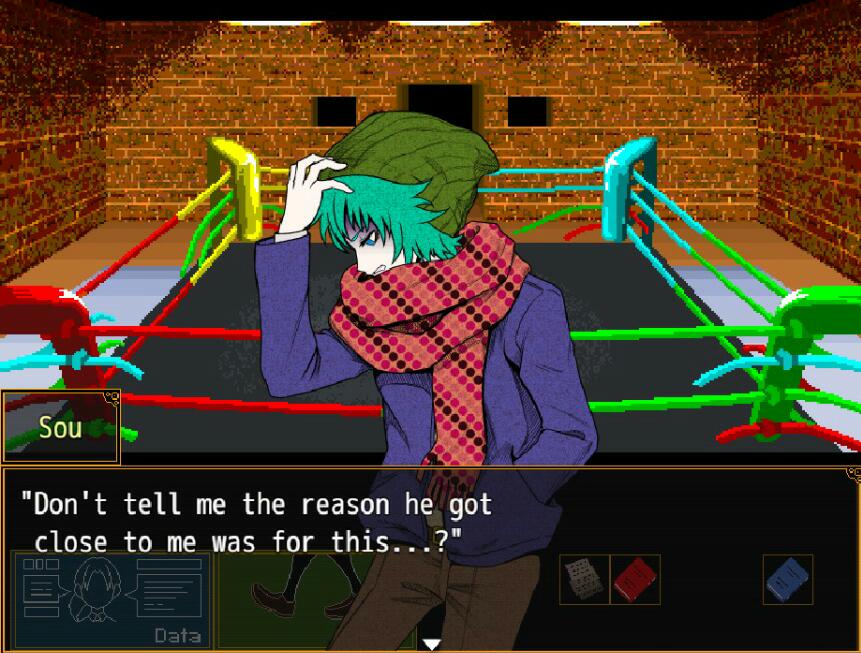 Also, don't forget that Sou has big trust issues. His faked identity, how distrustful he is about everyone in the first two chapters and his usual behavior are proof of it. I think that their relationship (friend or lovers) was, unlike pregame oumasai (?) isn't based on fear of being afraid of the other (Midori in this case), or being alone (because Shin has parents, and in his page's info, they spoiled him so they sure had loved him endlessly), but on trust. Sou had to blindly trust Midori and he betrayed him at some point: that would explain why he is so afraid of telling everyone the truth about himself in the second Main Game. Also, something very interesting happens after that Sou's dialogue. 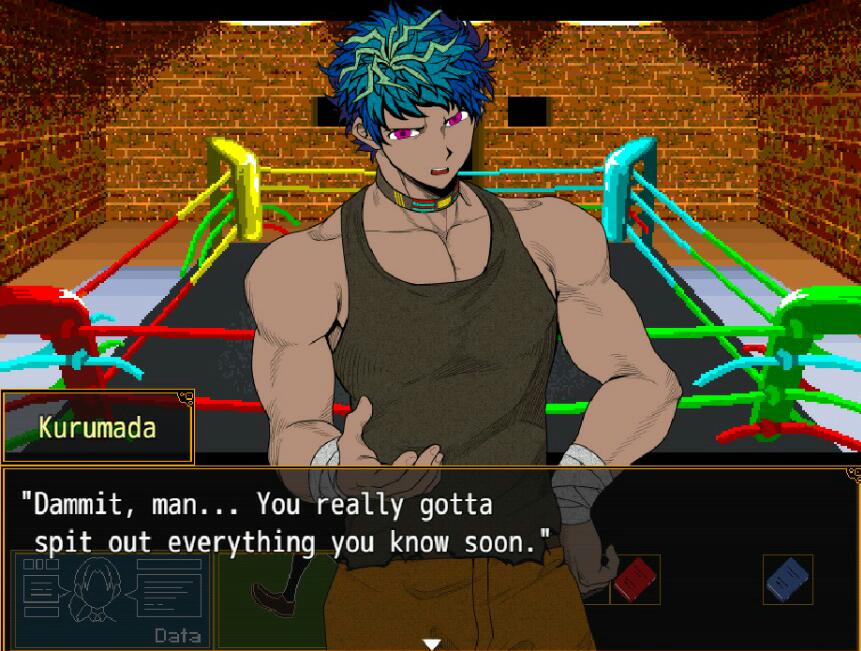 Kurumada: (...) "Dammit, man... You really gotta spit out everything you know soon." 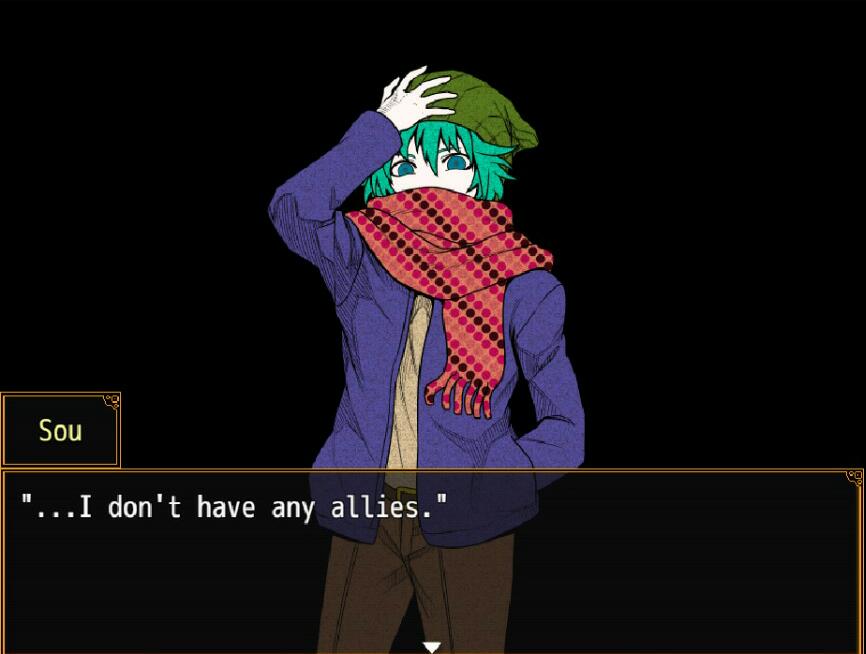 He just remembered why he doesn't trust people, why he can't trust somebody to catch him if he falls: why he has to be alone. He sure had to open himself completely to Midori, and he had to broken his trust in a very deep way, that much to leave Sou with permanent trust issues. After these words, he tells Kurumada, Sara and Ranmaru why Midori and her [Sara] weren't much different between them, and that the main course could wait for the end, since it's Midori's turn now. Then he cames back to his all-smiles mood and cheers Sara up to keep searching, and gives her the book to place in the library. Also, Sou wants to kill Sara because she voted and killed Kanna, but his hate/pain for Midori is much bigger, so he cooperates with her to kill him together and probably kill her afterwards. Sou's behavior is like someone who has been hurted so much and he is angry, but sad at the same time.

To end this post (i can't stop laughing because i called midori shin's boyfriend okay??? okay) that is longer than I thought it would be, also I haven't told everything I was thinking of KSKSKSKS, think of this. Sou knows Midori too well, that good that he can tell when he is being serious or joking, also why he does some or other things: Sou seems to know Midori very well, and vice versa. Also, don't yall sleep on Shin taking Sou's name to became stronger and win the killing game (the quote of "That's why I had to abandon myself" in the second main game). He saw Sou as the strong, and himself as the weak one: he took his micheivous personality and name in order to survive. If Sou hated Midori or just saw him as his enemy, would he take his identity? Or wear something that important and so distinctive of someone like a scarf with a special pattern?

To me, Sou and Shin's relationship was very abusive and all, but Shin kept caring and wanting to have Sou near him. Depsite his sadistic behavior, Shin trusted Sou deeply and Sou betrayed him at some point, thing that made Shin change drastically: passing from the submissive and innocent Shin, to the liar and mischeivous Sou. Right now, Shin must be really mad at Sou, but he also keeps caring about him because of his sad reactions when the AI talked about their past together or the option of Sou's feelings for him being a lie just to get something of him in exchange. Also, the way he doesn't investigate (as he would do normally) and stays in the Gallery, looking at Sou's painting with a sad/worried face.

Okay so, does anybody else think that Midori/Shin's relationship is very similar to pregame Oumasai? Well, they are very similar but they also have a huge differences I'd love to talk about! I really need somebody else to fangirl about this ☆ *: .｡. o (≧ ▽ ≦) o .｡.: * ☆

Since 3-1 is mostly about Midori (Midori-Shin's past relationship too), we all are going to Alice's route because he is his killer and he sure knows things about him. Also, Reko doesn't even mention Midori even if she was very affected by Alice's crime! It's more convenient for the plot to follow Alice-Sou's route because they both know a lot about Midori, and it's very interesting to see their interactions with him.

GUYS, I'M CRYING. LIKE, I SAW THE DEMO IN A GAMEPLAY OF A GIRL WHO TRANSLATED IT TO ENGLISH WHILE TALKING AND I DON'T KNOW HOW TO FEEL.

Like, in the girl's video, she choose to leave Kanna alive instead of Shin. ゞ◎Д◎ヾ And at some point, Midori said "I feel really, really bad for him [Shin]. I really wanted to kill him with my own hands": Kanna replied with "What did you just say?!" obviously angry, but Midori just told her "Don't get angry. Listen, you don't understand how much I love you." AND I DON'T KNOW IF HE'S TALKING ABOUT KANNA OR THE PARTICIPANTS, AAAAAAAHHHHHHHHHH. (╯°□°）╯︵ ┻━┻

If my theory of Kanna/Midori being siblings becames real I'm going to cry. I'm very excited to discover the relationship between Midori/Shin. I mean, if Sou meant that much to Shin (to take his name and probably his personality to win the killing game) and also wear his scarf, then why does Midori want to kill him? I have so many questions and I NEED THE TRANSLATION. I DON'T NEED SLEEP I NEED ANSWERS (・｀ヘ´・;)ゞ

If my translation of the text box was correct, the preview of the demo posted on Nankidai's twitter with Sou's sprite said "In other words, just kill me". I thought of the second anniversary's picture, this one, where Sou is looking at Kanna. Not Alice, not Shin, not even Sara: he's looking at Kanna.

We already know that both Sara and Kanna are adopted (Kanna is aware of this, Sara isn't), and basing on Gashu's words before he shoot himself (something like, "Have you ever had doubts about your upbringing?") we can assume that the two girls aren't the only ones who were adopted, idk. But the point is, what if Sou/Kanna are biological brothers? They even have a lot of similarities, like the green hair and the blue eyes (Kanna's are brighter than Sou's, but they really resemble each other). Sou's obviously the eldest brother, since Kanna's only thirteen and Sou seems to be on his 17-18's, the age he died since he looks (in the sprite) exactly the same in the picture of Kai's laptop. And also, the way he smiles at her in the anniversary picture is creepy, but he seems happy (unlike the smile of the sprites, that looks pretty fake) just by looking at Kanna. Also, Kanna is also hugging both Kugie and Sara (her's adopted and symbolic's sisters). It's a weak theory, but I thought of it and I'm very, very confused aND I DON'T NEED SLEEP, I NEED ANSWERS(๑•̀ㅁ•́๑)✧

Someone just messed up with Shin's page and even if I'm laughing, I'm also kinda upset. Could somebody fix that? ;;